Ok back to splash for a cure a wonderful woman named Christina who is creator and owner of a fabulous children’s clothing line called Ivanhoe Couture donated a sweet tutu outfit to our raffle. Well she alone set up a fundraiser for Phoenix Children’s Hospital at a luxury resort in Paradise Valley that included a child fashion show and she had our 3 monkeys in it.
I thought I would loose my mind back stage. For some reason I had the only children running like wild animals. Apparently I have no control. Most kids nervous around strangers and in a strange place… not mine.
The outfits were adorable! Her thing is blinged tops and tutu’s and cute hair accessories. Well Lily and Andi looked simply sweet enough to eat. And she had a Johnny Cash shirt for Ollie and it says “Baby in Black”. It was adorable! Ollie of all the kids was the most comfortable on the runway. Seriously, they clapped and he just ate it up. The child isn’t even two. I figured I’d have one model in the family, I just didn’t think it would be a boy.
My friend Stephanie emceed the thing, she is a local celebrity here and the host for a local morning show called Sonoran Living, so the kids already knew her and it was funny because Andi Jane came out shy and Stephanie said “she is not shy, show them your stuff” and then Andi strutted down the runway and at the end blew kisses! So maybe we’ll have two models. I was more hoping for doctors….
I got to push Lily in her chair and I was not prepared to be handed the microphone and describe Lily’s disorder. Ack! I sucked, but Lily looked so pretty it didn’t matter.
They also had some very special models, patients of PCH who were well enough to come. We met a little girl named Alexa who has Spinal Muscular Atrophy she is 3 and just such a doll! Seeing her with all her equipment made me sad to see how much some parents have to deal with and made us feel blessed that Lily, yes has an awful disorder, she is a healthy girl. And just so precious. She does not love fashion. She refused to open her eyes when we had the cute hat on her. Take the hat off, eyes open. She is so funny! They did an interview with me and she had her eyes closed the whole time. Anyway, it was an awesome day!
Here are some photos of the busy day. (which I ended with a 7 hour shift at the restaurant, needless to say I’m spending today relaxing! Well as much as I can with wild man Ollie) 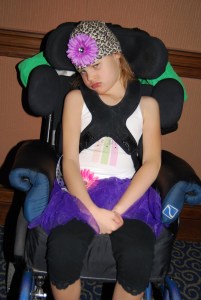 @oceanic.mama posted this and I read it. Then went back and read it again and felt this sense of understanding something I’ve never put into thought, let alone word. I can’t speak for individuals with a disability but I can speak as a mother, a care taker, for someone with a disability and wheelchair bound. You feel like you are inconveniencing everyone around you. You are fearful of new places because you don’t know how accessible it will be. You may have to wait longer for a table suitable for a wheelchair. You apologize for making others move to accommodate a pathway. You apologize to servers for being in the way. We apologize and try to be less. We try to make space for her and not to inconvenience others. Friends will say it’s their problem, not yours but you get conditioned living in a non accessible world. If not I’d just get hard and bitter and I guess apologetic seems like a better option. Just 2 weeks ago we went to a dance recital Lily was supposed to be in. I didn’t really even like the idea of Lily going on stage and just being pushed around while others danced. I tried to have a positive attitude about it but couldn’t shake the “Lily on display”, what if she had a seizure? Or went the bathroom? There I sat anxious waiting for her “inclusive” number and watched girls dancing and moving with grace with bodies that worked with their brains. Then a couple sweet girls from her class went up and danced to hakuna matata while we sat and watched, super confused. Then the lights came up and it was over. They never came to get Lily. We left and I was annoyed. I felt stupid. I talked to her teacher the next day (who had nothing to do with it, it was the dance program) and she was angry too. She said they said the ramp wasn’t cleared. The only access for a wheelchair, wasn’t clear. No one said anything to us. Just left us sitting there and didn’t include Lily for an “inclusive dance”. Oh the irony. But this was just another example of how it is. I didn’t want to post anything about it. I didn’t want to blast anyone. It was just another incident. Then I read this quote and it hit me, if we just keep taking it quietly nothing changes. {cont in comments}
We were so honored to continue Brooklyn’s wish ⭐️ love this piece Make a Wish made on Brooklyn and Lily. Link in bio! Make a Wish AZ is marching donations on giving Tuesday!! #makeawish #makeawishaz #disabilityawareness #specialneeds
My niece @ariel.brooke_ said the best thing about me living in Miami is when you all come to visit we get sleep overs 🥰 seeing my nieces as moms explodes my heart ❤️ loved my quick trip away with my family
If it weren’t for a reminder email from a teacher these projects would have been switched because I truly thought they each came home with the opposite project. Raising two little people this close in age at my age seems to come with complications 😅 also he didn’t want to stand by her for the photo because siblings in theory are a great idea, they can be difficult to execute. #irishtwins #oldmom #siblings
Last night I’m sobbing over her last HS game and today I’m in tears of pride watching her sign her commitment to CSU Pueblo for next year. Will I be singing closing time for the continuation of her senior year? “Every new beginning comes from some other beginnings end”🥹 thankful to @stormelitevbc, Basha HS, GHS and all the coaches and friends and family along the way to get her to this point - it truly takes a village 💜💚💛#senior #signingday #volleyball #csupueblo #gopackgo
We always notice a first. We always celebrate a first. Yet a lot of times we don’t notice a last. We don’t always see something end but when you know it and see it. It can really break your heart. 💔 Andi played her last game of High School volleyball and it crushed me a little harder than expected. 💔 #volleyball #highschoolvolleyball #senior #2023
Follow Calm Amongst the Chaos on WordPress.com