OK back in May, which only felt like yesterday, we went to see Taylor Swift in concert. I am not a big concert goer. Well anymore… I went to some pretty sweet shows back in my day… New Kids, MC Hammer, Debbie Gibson, Bon Jovi, Lollapalooza (95), George Strait, … yes I went to some concerts! Eclectic some may say. Cheap others will say because most of those I was asked and went. But honestly I have to really really like a band/person to go to a concert. Especially now. I like my ears to not ring. I like to not stand for hours, I like to not be touching body parts with sweaty strangers. I like my money in my wallet to stay in my wallet. I am old, maybe, but I think I have always been old. I have always liked to not like these things. I remember my friends just crying a river on our ride back from the New Kids on the Block concert and thinking… hu? Why are you crying. Your mom paid a ton for those tickets, our other mom just drove us across town, we were so far back my I love Jordan sign was only seen by the folks standing by us… I was just glad to be finally going home. So yeah, I don’t get all hopped up on that stuff. I don’t get it. I know it makes me so very uncool. I like music. Scratch, I love music. But I like music in a way that it is always around me. It’s the soundtrack of my life. It is always there, but going along with me. Not screaming, jumping up and down and sweating on me. Worship at church is my favorite time of church. I love music. Just wanted to make that clear.
BUT when I want to see a person/show I am into it like nothing else. Like Bette Midler, we saw her in Vegas. AND I LOVED HER! I wanted to marry her after the show! It was one of the best times of my life! It was a show, songs, dancing and hello Bette Midler! OK so maybe my spirit is a little closer to 70 … so what.
And then Taylor Swift. I got an email at work because we were ticket holders at this arena and it says “Any interest in Taylor Swift” in a heart beat I said YES! Long story short we got a suite, my sister and I shared the tickets, she brought her girls and friends they chose and I brought my girls and friends they chose (well I made sure the girls we brought were Andi and Lily’s friends).
I asked the moms to join us because it was a school night and we were at least an hour from home and we had enough tickets to do so, so there we were 12 of us, several little girls, a teenager and girls in their early 20’s, and us moms all getting ready for Taylor Swift!
I had no idea what to expect. I love her music and that was all I knew.
Then she came out! The show was amazing in ways I can’t describe!
I do think us moms could have liked it more than the girls. We were all singing. We were all dancing. Taylor looked so amazing. I felt like she was my best friend. Along with the other 20,000 folks in the place probably feeling the same way. I have a point. I am not a concert reviewer, I am just one who gives way too much back story before ever reaching a point.
But all this aside, yes she was an incredible performer, her show was bright, it was stunning, it was impossible to take your eyes off of. All this wonderful stuff that we all enjoyed. But what I truly noticed and enjoyed was how appropriate she was for all ages!
Last night I didn’t watch the VMA’s but I saw the backlash of it. Mylie is a train wreck, she is just a few moments away from shaving her head Brittany style. That is sad. It is a sad life they live in Hollywood and as much as my sweet girl Andi Jane loves all things acting and singing I would be hell bent on ever even letting her think of that road as a possibility. Home girl here as seen way too many seasons of Celebrity Rehab.
But so often these young fresh stars see themselves only as young stars they have to start sexifying themselves. Making themselves transform from one stigma to another. It is sad to me. I understand their world is not like ours. I don’t judge these young woman growing up under that hot spotlight, and I am not going to talk about something I know nothing about. BUT I am going to say what a fresh breath of air that Taylor Swift was.
What a role model for my daughters to see. She talked about not being mean and bullying. Talked about how special each member of the audience was. How they could be anything they wanted to be. She wore cute clothes but never slutty. She was an absolute class act.
I don’t even care what anyone has to say about her and her dating and whatever. I don’t care. Her persona on stage was outstanding. She was who my daughters can aspire to be like. She was a star in every way and I encourage you all to take your kids to see her. She is a rare find in this world and after that concert I became one of her biggest fans.
I know this sounds corny and I am sorry. But I will also add I became a Beliber after his movie and have seen things down hill for that boy sooo maybe my opinion doesn’t hold a lot of water? 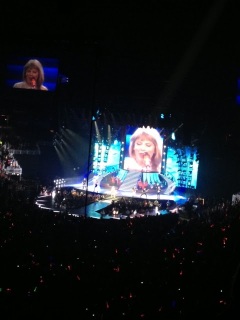 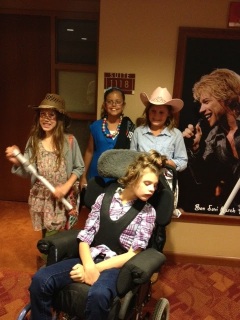